The Fruit of Our Labour 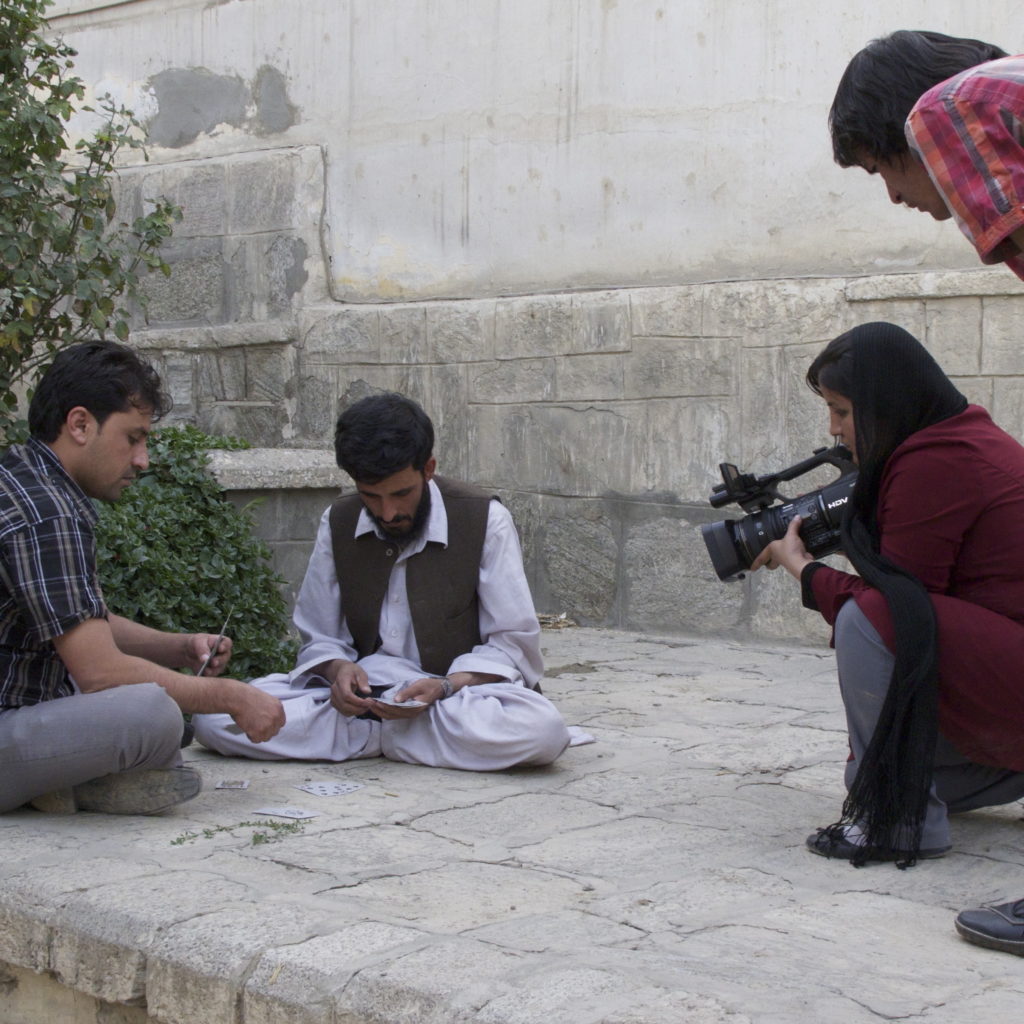 A new series of short documentaries by emerging Afghan filmmakers

It starts, as many great films do, with a black screen; then, a flicker. Through snatches of light, a woman is revealed, a headscarf tied at her neck, her body leaning over a table to light a kerosene lantern. Just as light escapes the match, The Road Above emits in small and elegant portions the life of Mona, the film’s protagonist; Mona, who, through an involuntary smile tells us about the husband she’s lost to heroin, the financial straits her family struggles against, and her hopes for a stable life. Simply and softly, through intentional, cinematic language, we spend time with Mona and her enduring mother.

Their country is one we’ve seen countless times over in news reports – a dust-strewn land where women seem to bend from the onerous weight of the chador (not, of course, the onerous weight of infrastructural instability brought on by decades of invasion and war), and where wisened faces peer into cameras, prayer beads moving steadily through their fingers; a country embedded among the terms ‘war-torn’, ‘conflict’, ‘Taliban’, ‘terrorist’, ‘wounded’, ‘dead’.

This time, though, in The Road Above and the other nine short documentaries comprising the Fruit of Our Labour collection, we see Afghanistan through more nuanced eyes, in images that may strike as familiar to some Iranians and unfamiliar to most Americans. In this Afghanistan, mothers and daughters eat breakfast together. They sit cross-legged on hand-woven rugs, tear at lavash or taftoon bread, and sip from tea in tall glass mugs. They speak about the day to come – a day in which even here, in a place we are told not to expect the stirrings of life, trips to the seamstress will be made; bazaars will hum with a thousand brilliant colours; fruit vendors will mix smoothies to lure new customers; cosmetologists will line the almond eyes of young beauties, and culture, quite simply, will continue to function amidst the turmoil.

The films in The Fruit of Our Labour were produced during a five-week intensive documentary training session held in Kabul, designed and conducted by Community Supported Film, a Boston-based nonprofit training local storytellers in the documentary format. ‘The way we learn about other people’s worlds is really through our own eyes’, explains Michael Sheridan, CSFilm’s founder. ‘It became an interest of mine to figure out how to implement a program … to create compelling stories that could be used locally and internationally to help people … understand what’s going on.’

Through a partnership with the Killid Media Group, CSFilm received 80 applications for its inaugural training programme. From that pool, an ethnically diverse group of ten storytellers were selected to work together for up to ten hours a day, six days a week for five weeks, to learn the skills required to make character-driven, scene-based documentaries. The filmmakers were chosen after a rigorous application process that gauged their storytelling fluencies, their commitment to social and economic development, and their plans for employing their training towards nurturing their professional growth, in addition to forgoing traditional ethnic and gender divisions.

This commitment to diversity is crucial in a nation wherein so many different ethnic groups reside. In a recent online conversation, Jamal Aram, a translator and project coordinator for the CSFilm programme noted that one of the issues Afghanistan faces is the fact that ethnic groups are often isolated from one another, and as such, are not able to overcome historical divisions. ‘I’ve always thought,’ says Jamal, ‘there should be something, some common ground that [could bring] different ethnicities … together [to] sit around a table and really start discussing their feelings and what they think of all these situations’.

This is a new way of seeing Afghanistan – one in which the camera’s gaze does not simply reinforce power inequities, but acts as a tool through which power and politics can be debated. And recreated.

We see exactly this kind of cross-cultural conversation taking place in Death to the Camera, directed by Sayed Qasem Hossaini. Like Iranian New Wave films, Death to the Camera relies on a deceptive simplicity to broach complex topics, and explores the relationship between the artifice of filmmaking and the truth of human experience. The film takes place during the span of a day on a worksite, where a group of female day labourers scoop dirt and rocks into small bags that they then gather into wheelbarrows and push off-screen. It is the women’s last day working under their contract. Throughout the day, their anxieties about finding the next job underline every conversation. They snap at one another. They complain. They work slowly, their steps dragging them reluctantly to the completion of this last day of pay. Despite these challenges, the women are neither depicted as victims, nor as subjects of the film; they are instead active agents whose conversations are often directed expressly towards the camera. ‘I wish your filming could help us get some aid’, says one woman. Later, another asks her co-workers: ‘Have you told all your problems to the camera? Can it leave now?’

More than just speaking to, and being aware of the camera, the women are actively negotiating their personal and cultural relationships to it. While in the US the camera tends to be trusted as a communication medium, many cultures are fiercely protective of privacy, and thus the documentary ‘eye’ can feel invasive and insidious. Social taboos, by discouraging people from revealing too much of their private lives or selves, preserve the camera’s status as a vehicle for delivering entertainment rather than truth.

In Death to the Camera, in fact, one of the women on the site is accused by her manager of making herself too ‘available’ to the camera and sullying her reputation. Sitting among her female coworkers, working steadily, she eyes the manager, stands up, and walks  away to confront him. Harkening the style of Iranian director Abbas Kiarostami, we hear the woman arguing with her manager off-screen, while we watch her co-workers on-screen, scooping dirt one moment, and attempting to turn their heads inconspicuously towards the tense conversation the next.

When the accused woman returns to her coworkers, she reiterates her frustration with her manager’s accusations. A sensitive coworker, not wanting to make the crew feel guilty for their presence, whispers: ‘Don’t say that. [The cameraman] will mind’. ‘No he won’t,’ the woman responds, ‘he knows the issues very well … he’s a filmmaker. He’s not after prostitutes and bad things’. In this conversation, we see the two women developing their own unique relationships to the camera. One sees the camera as a valued guest, and another sees it as an ally, another medium through which she can prove her case. In so doing, they carve a new space for documentary filmmaking in a society that has a relatively recent history with the form.

For the camera’s part, it does not shy away from these ‘negotiations’. It does not stop rolling, nor does it ask the women to stop referring to the camera. It allows itself to be integrated and even implicated. When the women start to discuss the inequities they face as day labourers, the conversation turns towards ethnic differences and the trouble Hazara women have in getting hired. The conversation becomes heated. We don’t see the conversation in full, but we do see that a Hazara woman has become especially affected by recalling the situation she faces. Immediately thereafter, the camera crew retreats. It’s unclear whether they were asked to leave by the women, or whether the conversation was simply becoming too tense; nonetheless, the camera’s gaze suddenly spins to the ground and haphazardly captures the feet of the crew leaving the scene.

This is more than a retreat. It is a deliberate turning of the gaze away from the women, and onto the crew. The arbitrary and contested territory between the photographer and the photographed dissolves, as does the vast expanse between those who study conflict and those who live it. The crew becomes another extension of the inter-ethnic conflict. Exasperated, they throw down their gear, and ask themselves how this conversation started in the first place. They ferociously squirt compressed air into the camera’s lens – almost as if trying to dust it for fingerprints – and debate their choices. Though they experience the conflict in different ways than some of the women themselves, they do not position themselves as objective documenters apart from the eruption, but as fellow country-persons affected by it – involved, somehow, in this ‘ecosystem’.  As the boom operator suggests, they are even in some ways complicit. ‘Actually, you started the ethnic conflict discussion’, he remarks.

This is a new way of seeing Afghanistan – one in which the camera’s gaze does not simply reinforce power inequities, but acts as a tool through which power and politics can be debated. And recreated. In the eyes and likeness of the labouring men and women who themselves are too often the terrain upon which power is played out.