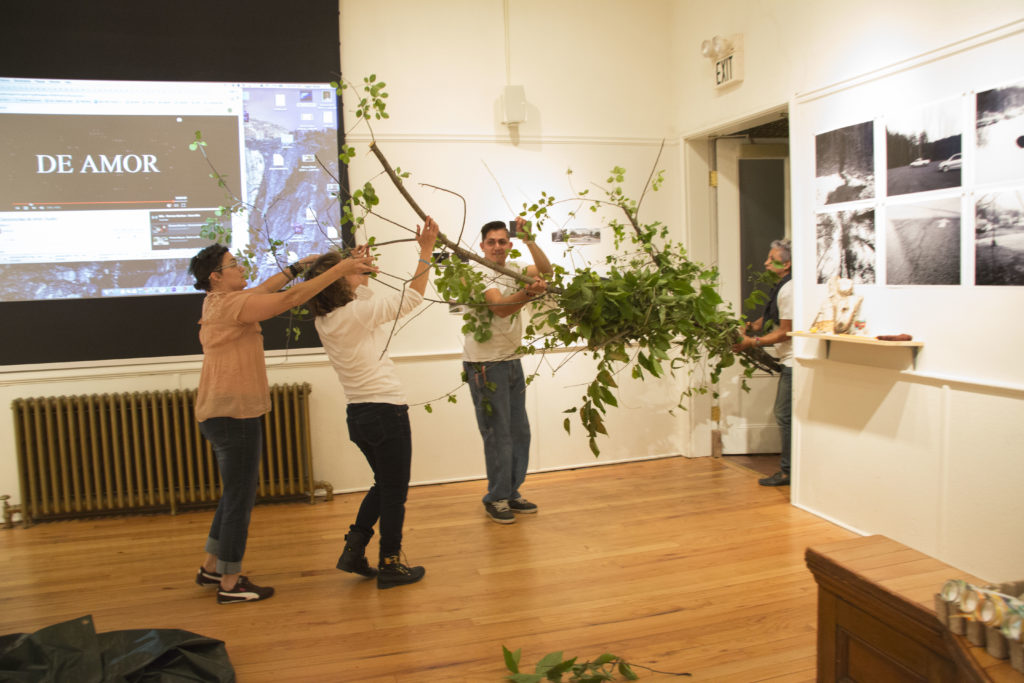 In the summer of 2016, while an artist-in-residence at the Skidmore College MDOCS Storytellers Institute, I began an ongoing, collaborative documentary engagement with a community of artists and organizers who work and/or reside at the Saratoga Race Course.

The Saratoga Race Course is one of the most lucrative thoroughbred racetracks in the U.S. In 2015, a study found that this city of 28,000 annually earns $237 million dollars through horseracing tourism alone.

The labor that supports this multi-million dollar industry is led by people who migrate every year on H2B visas from their home communities in Mexico and Central America to Saratoga Springs.

For six to eight months every year, this community works and lives in an area closed to the public called the “backstretch.” Though Saratoga Springs’ high-end economy immeasurably relies on immigrant communities, there remains a chasm of understanding maintained in part by the geographic segregation of residing at the backstretch (and by an unabashed racial hierarchy).

In 2016, I began working with Krystle Nowhitney Hernandez, oral historian and Deputy Director of the Saratoga County Equal Opportunity Council, and with a community of artists who work and reside at the Saratoga Race Course, most of whom are originally from Mexico.

Our collaboration holds that the work of creative community can be a vehicle for raising consciousness, imagining new possibilities for social relations, and exploring one’s own ever-evolving identity. All members of our collaboration, including Krystle and myself, are all immigrants or first-generation ourselves. As such, stories of cultural crossing are of both personal and political interest.

Our first project was a performance ethnography that occupied an elite art gallery in downtown Saratoga Springs and filled the space with the sounds, textures, and gestures of hot walking.

Of the jobs available to the migrant labor pool at the track, hot walking is one of the lowest paid and referred to as requiring less skill (though one would argue that anyone who can manage a horse for any amount of time is entirely skilled in a sensitive craft). The job of a hot walker is to cool down the horses after workouts and races. For thirty minutes after every exertion, the hot walkers walk the horses in circles, lead them to water, lead them to baths. From the outside, this labor appears both meditative and constraining. Tranquil and challenging.

Knowing our audience and the stories we wanted to tell, we created an installation and performance that would bring together two rather segregated audiences but in a way that does not reify patterns of “knowing” but asks the audience to use the participatory walking exercise as an invitation to embody knowledge. We also wanted to create a space in which the rules of the space were not entirely clear, in which audiences would need to sit with the sensation of not knowing or not understanding, an experience that we felt mirrors the process of entering communities and cultures not one’s own. To create this sense, we did not alert the audience in any of our promotional materials to what they would experience within the gallery space, and we even kept the door closed to the gallery until the walk began.

Here you see the program for the event. This is all the information people had before entering. No complete definitions, no direct translations, and really expecting the audience to do the work of decoding, which is work that immigrants have to do daily if not moment by moment.

Nearly 100 people filled the Spring Street Gallery for this one-time pop-up event, and the work we produced together led to two more years of collaborations, including the 360º film, “How to Tell a True Immigrant Story.”